When I bought tickets to take K to see a Katy Perry, I was hit with a lot of "opinions." Mostly, was I insane for thinking I could take my autistic 10 year old to a large arena concert?
My thought process was, if it all goes down in flames, we'll just leave, but I wasn't going to not take her just because she's autistic. She likes Katy Perry. She's super cute when she sings along to her songs. She deserves to see her as much as the next 10 year old girl, and I loathe, really, really loathe the idea or lot letting K do something bc of her neurology. I absolutely am not the parent who makes assumptions based on a diagnosis, and I would rather fail hard than never take the chance at all.
I prefer to see K as a 10 year old girl, rather than a kid with autism. I think she deserves that (can you tell I have some strong feelings about this?!)
Now, I was a bit nervous going in. Mostly because I had bought tickets in the balcony (I'm cheap), and K can sometimes have an intense fear of heights. The couple days leading up to the concert I was kicking myself for not buying in a lower section, but there wasn't much I could do about it, so I hoped for the best.
We armed ourselves with binoculars, headphones, and once there I loaded us up with plenty of snacks. All things that would, I hoped, allow us a successful night. 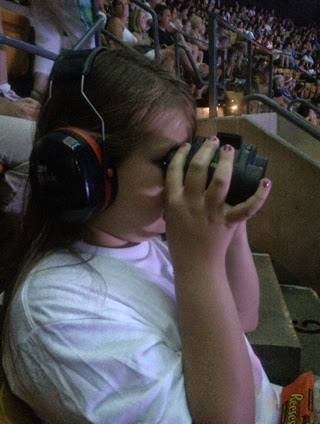 The first thing we did was stop off to buy a t-shirt. K chose the most rainbow-y one, and immediately wanted to put it on. 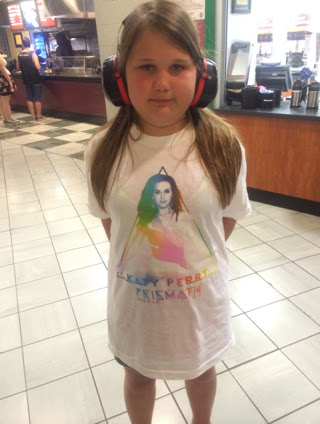 Then we got settled in our seats (no freaking out, and K loved having the binoculars!), and waited for the concert to start.
This was probably the most difficult time of the night. K wasn't familiar with/didn't care about the opening act, and the hour wait between them and Katy Perry was not her favorite thing ever, but she did fantastic! Sure, she asked 70-11 times when Katy Perry was coming onstage, but probably every other kid there was asking the same question.
We took a walk. Went potty. Bought some more snacks, and made it through unscathed.
Now, I wish I had a photo of K's face when Katy Perry took the stage. Her eyes opened wide, and a giant smile on her face as she turned to look at me. It's forever etched in my memory. I knew at that moment it wasn't a mistake bringing her there.
About halfway through, K was petering out. Mostly because it was late, and she was tired. She didn't get upset, though. I told her we could leave whenever she wanted, but Firework, her favorite song, wasn't until the end (thank you Setlist.fm. Being able to show K the set list (especially during the opening act when she wanted to know how much longer they'd be playing) was invaluable!) So, she decided to hang in there and stay.
It didn't hurt that one part of the show was cat themed. That was such a highlight for my animal loving girl! (Kitty Purry, I think it was?) 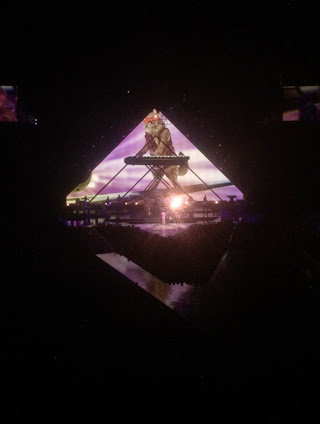 I was pretty sure K was going to fall asleep in her chair by the end, but she hung in. She got up and danced, sang along, and really did have a great time! The few fears I had were totally unfounded, and I felt vindicated. I hadn't made a horrible choice bringing her there.
A label will never define what K can and cannot do. Never. Even if it hadn't gone well, I'd still be proud we tried. She liked Katy Perry, she wanted to go, the end. 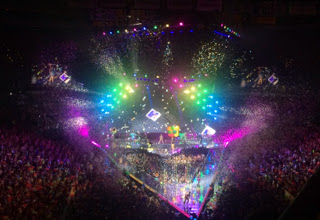 It was a fabulous night, and one I look forward to repeating again. Maybe I'll even spring for the good seats next time. 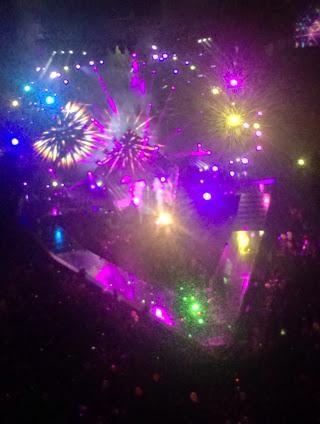 My girl is a firework! 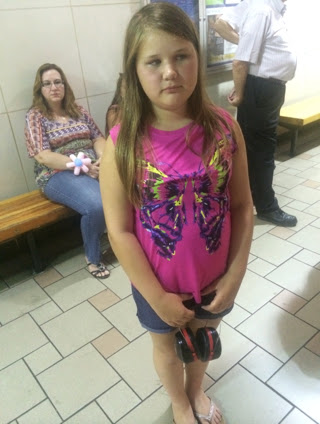 One last photo. Waiting for the subway. Making sure mom doesn't cross the yellow line :) Just because she's cute.

Posted by YellowMustardMom at 4:56 AM 2 comments: Links to this post